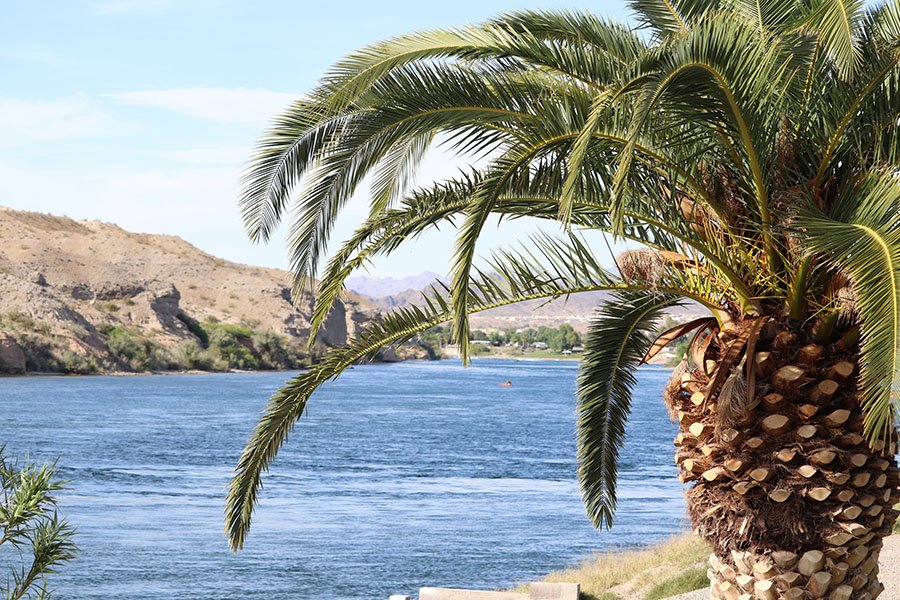 From the Mojave villages to Fort Mohave and Hardyville, Laughlin and Bullhead City, the Colorado River was the cornerstone. Originally the river served as an artery of commerce, and the communities on its banks thrived. With completion of Davis Dam, new communities were built on electrical generation, recreation, and warm sunny winters prospered.

With passage of the Reclamation Project Act in 1939, a new era dawned in the desert southwest. To harness the power of the lower Colorado River, on April 26, 1941, the Bullhead Dam project was authorized. It would later be renamed Davis Dam, an honorarium for Arthur Powell Davis, the director of the Bureau of Reclamation from 1914 to 1923. In comparison to the mighty Hoover Dam, it was a relatively small project and as a result, when the contract for construction of the dam and powerhouse was awarded in June of 1942 the estimated time for completion was forty-eight months. This included construction of Davis Camp on the Arizona side of the river. The mess hall and dormitories were deemed crucial to the project as the dam was being built in a relatively remote part of Arizona with Kingman and Needles both being more than thirty miles away. Access roads to Kingman and Needles were also a part of the project.

As an historic footnote, shortly before WWII options were being evaluated to bypass the Route 66 bottleneck that was Sitgreaves Pass in the Black Mountains. In 1949 a preliminary survey was completed for a Route 66 realignment. If built this storied highway would have roughly followed modern state highway 68 from the U.S. 93 junction, U.S. 466 in the 1940s, to the Colorado River. It would then cut west across the desert to connect with U.S. 466 near the Nevada/California state line.

In 1952 the highway was instead rerouted to follow the 1914 National Old Trails Road Valley Cutoff west from Kingman through Yucca. In the late 1950s the earlier Route 66 survey was dusted off and updated for a proposal that called for I40 to connect Kingman with I15 at Bishop, California. This would have resulted in a bypass of Yucca, Needles, Essex, Amboy, and Ludlow.

In the spring of 1943, the Davis Dam project was suspended as it was not deemed a vital war asset. Workers, equipment and building materials were transferred to Kingman for use in the construction of the Kingman Army Airfield. Auxiliary fields were also constructed in Yucca, near Red Lake north of Kingman, and at Site Six, now the island in Lake Havasu City.

On September 2, 1945, the Bureau of Reclamation initiated revaluation of projects in the desert southwest including Davis Dam and Bridge Canyon Dam. In April 1946, Utah Construction was awarded the primary contract for construction of the dam. A primary change in the project was in regard to Davis Camp. Instead of a rough construction camp, this was now to be a small town for workers, most of whom were veterans, as well as their families. The original plan called for construction of one hundred homes, a recreation center with swimming pool, general merchandise and grocery store, several churches, various service facilities for storage and repair of equipment, post office and service station.

With the completion of Davis Dam in 1953, Davis Camp faded from prominence. In the spring of 1959, the Bureau of Reclamation initiated the sale, demolition, and removal of buildings. Many of the buildings, however, were given a second lease on life as homes, store fronts or storage facilities in Bullhead, Topock, Needles and Kingman. By 1970, less than thirty-five original buildings remained.

In this year, a new chapter in Davis Camp commenced. As many employees began purchasing homes in the area, the Bureau of Reclamation solicited National Park Service and Arizona Department of Public Safety employees to rent the remaining homes. Then in 1982 the Bureau of Reclamation changed the status of Davis Camp, suspended all rental leases, and deemed the property as surplus. As a result, most of the remaining houses were sold and moved, or razed. The Catholic Church building remained and was later used to house the Colorado River Historical Society Museum.

In 1982, a joint initiative between Mohave County, National Park Service, Bureau of Reclamation, National Park Service, and the Arizona State Parks Board launched a project to transform the site regional river side park. Six small garages, original buildings, were retained to serve as the park’s maintenance yard and a former house was remodeled to serve as the ranger station. In 1988, two of the original 1946 houses were renovated and offered as rentals for park guests.

Over the years the park evolved to meet the needs of the growing community of Bullhead City. A combination restroom and shower building were added along with expanded parking areas, a concession stand, and in 2010, and amphitheater.

Bullhead City is a modern progressive community. It is also a community with a rich and colorful history that has a common thread, the waters of the Colorado River.