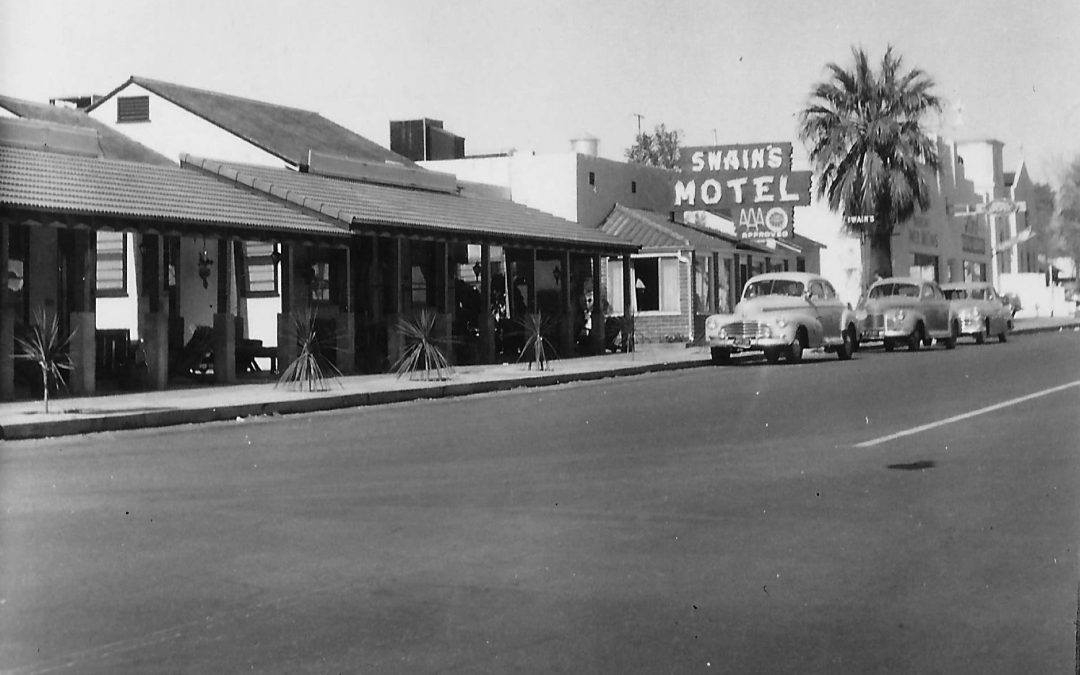 There is never a dull weekend for visitors or residents of Bullhead City on the Colorado River in western Arizona. Day trip, and even half day trip, options abound. Each is unique and fascinating. Each has a special charm. Each is a memory making odyssey.

As an example the historic community of Needles, California is only a short drive south on highway 95. At a Colorado River crossing for a Native American trade route the survey expedition of Lieutenant Amiel Weeks Whipple of 1854 labeled the jagged peaks along the river as “The Needles.” The Atlantic & Pacific Railroad established a station and small construction camp on what is now the Arizona side of the river at this crossing in 1883.

A post office under the name Needles opened there in February of that year. In conjunction with plans for construction of a division point, the railroad relocated the tent city to the California side of the river On October 11, 1883.

In the early 20th century, the National Old Trails Road, and then Route 66 added a new chapter to the city’s history as a transportation hub. Both of these early highways followed Front Street parallel to the railroad tracks and then around Santa Fe Park, in front of the stylish El Garces, a Harvey House hotel and restaurant.

The El Garces Harvey House dates to 1908 and was the replacement for an older wooden depot that burned. The namesake for the establishment was Father Garces, a Franciscan priest that led several expeditions in the area during 1775 and 1776.

The hotel closed in 1949. Shortly after this date, the Santa Fe Railroad tore down the north wing and converted the remaining structure into offices. Only extensive lobbying from the city of Needles saved it from the wrecker’s ball after centralization of operations by the railroad led to its abandonment and scheduled demolition. Part of the campaign to save this historic structure was its designation to the National Registry of Historic Places. The El Garces with its stylish fountain in the courtyard was renovated as a conference center.

It is but one of the the gems and treasures found in the historic heart of Needles. In addition to the El Garces, the Directory of Motor Courts and Cottages, an AAA publication from 1940, lists the Robinson’s Bungalow Hotel & Motor Inn as recommended lodging. This time capsule has also survived into the modern era as an apartment complex.

A clearer picture of the importance of this desert oasis to travelers on Route 66 is found in A Guide Book To Highway 66 by Jack Rittenhouse published in 1946. In addition to the El Garces he lists three other hotels, California, Gateway, and Monarch. Auto courts and motels listed include West End, Gray’s, Swain’s, The Palms, Havasu Court & Trailer Camp, and Motor Inn Motel. He also notes three garages, numerous cafes, and stores.

A surprising number of early motels are still existent although they now serve as apartments with rooms rented by the week or the month. The two most notable are the 66 Motel and The Palms, a facility with origins dating to the late 1920s.

Another location with association to Route 66 and Hollywood history is Carty’s Camp. Bill Carty established the facility in 1925 with tent-cabins similar to ones he had experienced during a stay at the Grand Canyon. Expansion during the 1930s included a gas station, garage, campground, and cottages advertised as Havasu Court. The complex appears in a scene of the 1940 film adaptation of The Grapes of Wrath.

Picturesque historic structures and tarnished treasures abound in Needles. Located at W. Broadway Street and F Street is the Needles Theater built in 1929 with a Masonic Temple on the second floor. It is being renovated. The Art Deco masterpiece that opened as Claypool & Company in 1930 is now used by Palo Verde Community College. Valenzuela’s Café at 224 Chestnut Street with its colorful murals is a one family owned restaurant that opened in 1952.

Needles is but one many fun filled day trips near Bullhead City. If you are looking for more day trip ideas contact the Bullhead City Chamber of Commerce.